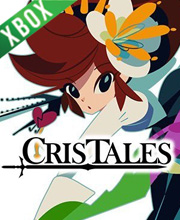 What is Cris Tales Game Code?

It's a digital key that allows you to download Cris Tales directly to Xbox One directly from Xbox Live.

How can I find the best prices for Cris Tales on Xbox one?

Allkeyshop.com compares the cheapest prices of Cris Tales on the digital downloads market to find the best sales and discount codes on trusted stores.

Cris Tales Xbox One is a role-playing video game that is developed by Dreams Uncorporated, SYCK and published by Modus Games.

Crisbell, a newly awakened Time Mage along with her companions will take on the Time Empress and her army as they threaten to destroy Crystallis as well as the other Kingdoms in the area.

As a Time Mage, Crisbell has the ability to use Time Magic where she can send her enemies to the past or the future. Your strategy will center around this concept.

Every choice that you make will reshape the future. You will be experiencing the past, present and future simultaneously.

Offering a fascinating story and characters, a stunning world that you can travel through with an airship or on a boat, and beautifully hand-drawn 2D graphics.

BOX GAME : This is Cris Tales Xbox One Box Edition (DVD-CD ROM). This is not a downloadable product. Please read the sellers page for any additional costs (taxes, shipping), delivery time for your country and languages available.
Standard Edition. Read the store description to know the content.

Be the first one to write a review about Cris Tales !