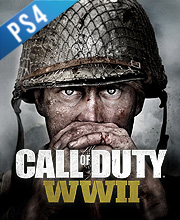 What is Call of Duty WW2 Game Code?

It's a digital key that allows you to download Call of Duty WW2 directly to Playstation 4 from PSN (Playstation network).

Allkeyshop.com compares the cheapest prices of Call of Duty WW2 on the digital downloads market to find the best sales and discount codes on trusted stores.

Got it few days ago , I’m enjoying it so much and thank you

I’m happy this COD will be more like the first ones of the serie.

It is a bit expensive
Story mode is probably the best thing about this game it is short but it is pretty intresting
Multiplayer is not bad, better than previous Call of dutys, except from people spamming greneades in war mode which is darn annoying
Haven’t tried zombies yet but I heard that is pretty fun

I’m happy this COD will be more like the first ones of the serie.

Hello there,
I’m very excited to play Call of Duty WW2 on PS4