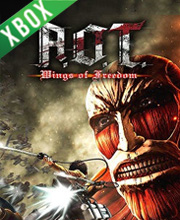 What is Attack on Titan Wings of Freedom Game Code?

It's a digital key that allows you to download Attack on Titan Wings of Freedom directly to Xbox One from Xbox Live.

How can I find the best prices for Attack on Titan Wings of Freedom on Xbox one?

Allkeyshop.com compares the cheapest prices of Attack on Titan Wings of Freedom on the digital downloads market to find the best sales and discount codes on trusted stores.

Attack on Titan: The Wings of Freedom is an action video game developed by Omega Force and published by Koei Tecmo. Relive the events of the first season of the Attack of Titan anime but in a video game.

The gigantic human eating Titans are back and are on the attack. Play as any of the 10 characters available to choose from: Hange, Krista, Levi, Connie, Sasha, Jean, Armin, Mikasa and Eren to take down these hideous monsters with their different skill sets.

The game’s story revolves around three young survivors whose city has been destroyed by the huge Titans. They group up and in due time find themselves joining the Scout Regiment to protect the remaining humanity.

Finish all 20 missions, its additional 5 bonus missions plus 66 side missions. Play it with a friend in co-op or solo.

You must do everything in your power to protect humanity as a soldier! Fly through the sky and slash through the unsightly Titans, kill every single Titan that you can!

Zoom 1m 3m 1y All
Track product
XBOX ONE GAME CODE : Use the Digital Code received by mail in your Xbox One account to download Attack on Titan Wings of Freedom from the Xbox Live. Internet connection is required. Please read the store description about any language or region restrictions.
Standard Edition
Compare Choose & Buy Download (743)