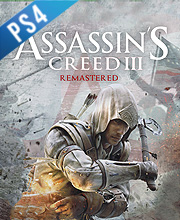 It's a digital key that allows you to download Assassin's Creed 3 Remastered directly to Playstation 4 directly from PSN (Playstation network).

Allkeyshop.com compares the cheapest prices of Assassin's Creed 3 Remastered on the digital downloads market to find the best sales and discount codes on trusted stores.

Assassin’s Creed 3 Remastered is an open-world story-driven action–adventure game published and developed by Ubisoft for the PlayStation 4.

As the name suggests, this is a remastered version of the third installment in the Assassin’s Creed series. The developers are awarding you an opportunity to come and relive the American Revolution for the first time in this game with enhanced graphics and improved gameplay mechanics. This revamped version of the classic also comes with Assassin’s Creed Liberation Remastered and all the solo DLC content.

Be the first one to write a review about Assassin's Creed 3 Remastered !