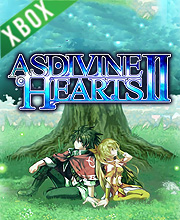 What is Asdivine Hearts Game Code?

It's a digital key that allows you to download Asdivine Hearts directly to Xbox One from Xbox Live.

How can I find the best prices for Asdivine Hearts on Xbox one?

Allkeyshop.com compares the cheapest prices of Asdivine Hearts on the digital downloads market to find the best sales and discount codes on trusted stores.

Asdivine Hearts is a role-playing game developed by EXE-CREATE and published by KEMCO for the Xbox One.

Last year the world of Asdivine was enveloped by a brilliant flash of light. Ever since then, the influence of shadow has grown exponentially across the land. Although the event itself was undoubtedly connected with the heavens, few people seem to have realized the far-reaching implications of what transpired. In present day a young man named Zack, and his childhood friend Stellain received a revelation from a chubby cat that proclaims to be the Light Deity, declaring the world to be on the verge of destruction.

The game has plenty of subquests, a battle arena, treasure to dig for, and an enemy guide to complete.

Players are able to customize characters once they set puzzle piece-like jewels in a box known as a rubix.

You may also fight to achieve Guild Coins at the battle arena.

EU XBOX ONE GAME CODE : Xbox Live Game Code for EUROPE ONLY. Use the Digital Code received by mail in your Xbox One account to download Asdivine Hearts Xbox One from the Xbox Live. Internet connection is required. Please read the store description about any language or region restrictions.
PC Win 10 / Xbox Key : This is a Microsoft Xbox Play Anywhere code to play on PC and Xbox One and XBOX X|S. You need to have installed Windows 10 Anniversary Edition update on your PC or the latest update on your Xbox console. Log into your Microsoft account to download and play. Read closely the description given by the store to activate your game.
Bundle
Standard Edition