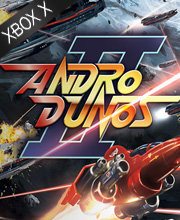 What is Andro Dunos 2 Game Code?

It's a digital key that allows you to download Andro Dunos 2 directly to Xbox Series X from Xbox Live.

How can I find the best prices for Andro Dunos 2 on Xbox Series X ?

Allkeyshop.com compares the cheapest prices of Andro Dunos 2 on the digital downloads market to find the best sales and discount codes on trusted stores.

Andro Dunos II is a classic retro shoot-em-up game developed by Picorinne Soft, the sequel to the iconic shoot-em-up game Andro Dunos released back in 1992 by Visco studio for the Neo-Geo MVS and AES systems. Whether you’re a fan of classic games back then or you’re a new SHMUP fan there’s no better time to get into the Andro Donus universe than now.