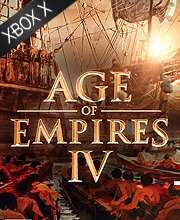 What is Age of Empires 4 Game Code?

It's a digital key that allows you to download Age of Empires 4 directly to Xbox Series X from Xbox Live.

How can I find the best prices for Age of Empires 4 on Xbox Series X ?

Allkeyshop.com compares the cheapest prices of Age of Empires 4 on the digital downloads market to find the best sales and discount codes on trusted stores.

Age of Empires IV is the long-awaited return of the Iconic RTS series into the modern video game landscape, the culmination of 29 years of age of empires games. Featuring both the familiar strategic feel of Age of Empires II and innovations and other features from other age of empires games, like the age-up options in AOE III. Be at the center of history and witness the battles that shaped the world as we know it today in the game’s single-player campaign in stunning 4K graphics, Age of Empires IV brings the Real-Time Strategy genre to a whole new generation.