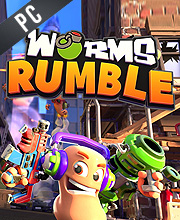 What is Worms Rumble CD key?

It's a digital key that allows you to download Worms Rumble directly to PC from the official Platforms.

How can I find the best prices for Worms Rumble CD keys?

Allkeyshop.com compares the cheapest prices of Worms Rumble on the digital downloads market to find the best sales and discount codes on trusted stores.

Worms Rumble is Worms but so much better. This time around, play in an arena-based 32 player, real-time, cross-platform combat and get to enjoy the many modes available.

Worms Rumble isn’t Worms, but it’s still a lot of fun and pretty addictive. Winning a round offers players the same dopamine hit as other battle royales but in quicker succession. Worms Rumble offers non-stop action by sacrificing some of the strategy of classic Worms titles while continuing the series’ tradition of outlandish weaponry, but it does feel like the type of game that lacks staying power – more of a nice option few people will end up committing to rather than a new main game.

Worms Rumble comes just in time to celebrate the franchise’s 25th anniversary with a fun and chaotic albeit very bare-bones entry.

The Deluxe Edition includes the base game Worms Rumble, the new Challenger Pre-Order Bonus and the Legends Pack Premium DLC.

Find all the best prices for Worms Rumble DLCs on Allkeyshop!

EPIC GAMES KEY : Region Free / Worldwide. Requires Epic Games Launcher App in order to play the game. You need to create a free account here in order to download Worms Rumble from Epic Plateform . Read the description on the store page about any language or country restrictions.
EU STEAM CD KEY: Requires an EUROPEAN IP address or you must activate it with a VPN (Virtual Private Network) in order to play Worms Rumble. Might have languages restrictions or language packs. Read the description on the store game page to know if the EU IP is only needed for activation or for playing also (maybe on EU Servers). Most of the stores offer you their help, or show you how to do this with a tutorial to follow.
EUROPEAN STEAM GIFT : It’s a steam gift for Europe which requires an European IP address to activate and to play Worms Rumble on Steam. Read carefully the store description about region and language restrictions.
STEAM GIFT : A Steam gift is a one-time transfer you receive. You activate and install Worms Rumble to play on Steam, it is a non-refundable game that stays in your Steam games collection. Please read the store description about any language or region restrictions.
STEAM CD KEY : Use the Steam Key Code on Steam Platform to download and play Worms Rumble. You must login to your Steam Account or create one for free. Download the (Steam Client HERE). Then once you login, click Add a Game (located in the bottom Left corner) -> Activate a Product on Steam. There type in your CD Key and the game will be activated and added to your Steam account game library.
STEAM KEY ROW : It means for Rest Of the World countries which are not concerned by the region restrictions. This product can't be purchased and activated in Several countries. Please read the store description to know the full list of countries which are concerned. Use the key to Download and play Worms Rumble on Steam.
PC Win 10 / Xbox Key : This is a Microsoft Xbox Play Anywhere code to play on PC and Xbox One and XBOX X|S. You need to have installed Windows 10 Anniversary Edition update on your PC or the latest update on your Xbox console. Log into your Microsoft account to download and play. Read closely the description given by the store to activate your game.
Bonus Edition
Deluxe Edition
Preorder bonus
Standard Edition

Hope that this is just as good as the old Worms Rumble.

FINALLY, a new Worms has arrived, and what’s better is that it has a fresh new look!

prefer old versions of worms but i have to say this is really a lot of fun, unfortunately you can’t destroy the world like any other worms …

One of the best games of the Worms universe. At this price then it is absolutely to have

Worms Rumble is a good game i played from beta and is rly nice.
I recommend this one.