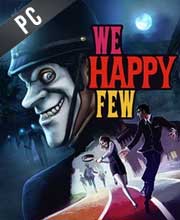 What is We Happy Few CD key?

It's a digital key that allows you to download We Happy Few directly to PC from the official Platforms.

How can I find the best prices for We Happy Few CD keys?

Allkeyshop.com compares the cheapest prices of We Happy Few on the digital downloads market to find the best sales and discount codes on trusted stores.

We Happy Few is an action, adventure video game that is developed by Compulsion Game and published by Gearbox Publishing.

This takes place in the mid-1960’s in the English City of Wellington Wells, this is a drug-fuelled society that was formed following an unexpected timeline of events within the World War II, and is now on the verge of downfall. Residents of the Wellington Wells seek ways to forget the war began taking in drugs known as “Joy” that leaves them constantly happy, but lacking morals.

As a player, you choose to stop using the drug and is dubbed a “Downer”. You must create your way to survive and complete something that is important to you, while trying to escape the city’s problems and before it socially collapses.

The game features three different playable characters, each with their own, unique storyline. As you hide from the city’s plague or fight back, you will encounter some glimmer of hope, or dark humor, and even a redemption along your path.

Collect and scavage dor items, craft your own weapons, tools, devices and collect recipes while you make your way through the puzzles and encounters. Fight using your very own weapons or with your bare hands without killing anyone.

Zoom 1m 3m 1y All
Track product
GOG.COM CD KEY : You need to register on Gog.com, then use the GOG Key to download and activate your game to play We Happy Few.
EU STEAM CD KEY: Requires an EUROPEAN IP address or you must activate it with a VPN (Virtual Private Network) in order to play We Happy Few. Might have languages restrictions or language packs. Read the description on the store game page to know if the EU IP is only needed for activation or for playing also (maybe on EU Servers). Most of the stores offer you their help, or show you how to do this with a tutorial to follow.
EUROPEAN STEAM GIFT : It’s a steam gift for Europe which requires an European IP address to activate and to play We Happy Few on Steam. Read carefully the store description about region and language restrictions.
STEAM GIFT : A Steam gift is a one-time transfer you receive. You activate and install We Happy Few to play on Steam, it is a non-refundable game that stays in your Steam games collection. Please read the store description about any language or region restrictions.
STEAM CD KEY : Use the Steam Key Code on Steam Platform to download and play We Happy Few. You must login to your Steam Account or create one for free. Download the (Steam Client HERE). Then once you login, click Add a Game (located in the bottom Left corner) -> Activate a Product on Steam. There type in your CD Key and the game will be activated and added to your Steam account game library.
STEAM KEY ROW : It means for Rest Of the World countries which are not concerned by the region restrictions. This product can't be purchased and activated in Several countries. Please read the store description to know the full list of countries which are concerned. Use the key to Download and play We Happy Few on Steam.
PC Win 10 / Xbox Key. Digital code which allows you to play on both Xbox and Windows 10 PC. See below for more informations.
Deluxe Edition
Standard Edition
Compare Choose & Buy Download (803)

Love this game but theres some problems. First is performance second is gameplay, it doesnt have agreat shooting sense. idk to buy

absolute let down compared to early access version, from a great potential “on the rails” story driven game to generic survival openworld garbage

Love the artstyle of this game, really gives off a Bioshock-esque style! And the price is great now, so time to buy it 😀

i liked it tho im not that into stealthy games, nice look

This game is one of the best games i have ever played..and for a price lesser than 10 € it really is a steal, absolute worth it.