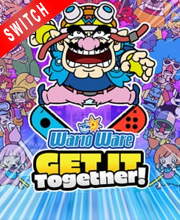 Buy WarioWare Get It Together Nintendo Switch Compare Prices

What is WarioWare Get It Together Game Code?

It's a digital key that allows you to download WarioWare Get It Together directly to Nintendo Switch directly from Nintendo eShop.

How can I find the best prices for WarioWare Get It Together on Nintendo Switch ?

Allkeyshop.com compares the cheapest prices of WarioWare Get It Together on the digital downloads market to find the best sales and discount codes on trusted stores.

WarioWare Get It Together is a fast-paced puzzle game where you try to complete sets of increasingly difficult Microgames as fast as you can, developed by Nintendo EPD and Intelligent Systems it’s the 9th game in the WarioWare series. Wario and their friends have been trying their hand at being game developers again in this latest attempt they managed to complete a fully-fledged video game but due to some unknown bug, the game Wario and his friends have been teleported into the game itself! instead of just controlling a disembodied hand and playing the microgames yourself you will need to control a plethora of different characters with unique move sets and abilities that will help you complete the microgames.

WarioWare: Get It Together! is a WAH-nderful addition to the WarioWare series. Between the microgames themselves, the quirky humor, and the new mechanic featuring all of Wario’s friends, this game is a gift to fans of the series. However, not all playable characters are equally useful, and not every multiplayer mode will dazzle you.

There is almost no one I would not recommend WarioWare: Get It Together! to, except maybe my grandmother. And your grandmother, too, probably. Everyone else? It’s a heck of a lot of fun, and well-worth adding to and multiplayer Switch library.