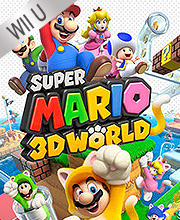 It's a digital key that allows you to download Super Mario 3D World directly to Nintendo Wii U from Nintendo eShop.

How can I find the best prices for Super Mario 3D World on Wii U ?

Allkeyshop.com compares the cheapest prices of Super Mario 3D World on the digital downloads market to find the best sales and discount codes on trusted stores.

Here is the Messiah awaited by the community and the fans of the saga, and the least we can say is that it responds favorably to the expectations of the players. It there can be no doubt that it will be the most successful of the series certainly benefiting from new technology compared to the first all aspects, but it has combined the novelty and the retro side of Mario, which was not easy to achieve.

Full of references to the entire series, Nintendo has managed to make a kind of big summary of well known game mechanics.

New are legion and the creativity of the developers seems to have no limits, to our delight!

Note among all the new aspects not noted here (it would take a lot of time), you can play four different characters plus more which you will have the leisure to unlock during the game.

Zoom 1m 3m 1y All
Track product
NINTENDO CODE : This is a digital code for Super Mario 3D World. Use the download code on the Nintendo eShop of your Console. Once connected to the Nintendo eShop, you can enter and redeem the Download Code. Read carefully the store description about any language and region restrictions.
Standard Edition
Compare Choose & Buy Download (803)

Classic Mario game with incredible 3D graphics. Although not a big fan of this games.