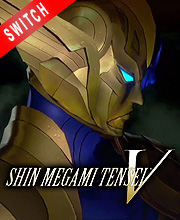 It's a digital key that allows you to download Shin Megami Tensei 5 directly to Nintendo Switch directly from Nintendo eShop.

How can I find the best prices for Shin Megami Tensei 5 on Nintendo Switch ?

Shin Megami Tensei V wants you to become a God and throws everything it’s got at you to test your mettle. At times rebellious and stubborn, Atlus’ artisanal approach to RPG craft makes up for any shortcomings.

SMT V is perhaps a little too smart for its own good and might alienate some people in the process, but it’s also refreshing to have developers create something that actually dares to have that level of confidence in their audience.