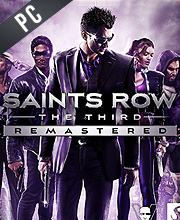 What is Saints Row The Third Remastered CD key?

It's a digital key that allows you to download Saints Row The Third Remastered directly to PC from the official Platforms.

How can I find the best prices for Saints Row The Third Remastered CD keys?

Allkeyshop.com compares the cheapest prices of Saints Row The Third Remastered on the digital downloads market to find the best sales and discount codes on trusted stores.

Experience Saint row the third modernized and upgraded in saint row the third remastered, Years after the third street saints took over Stilwater they became famous and was celebrated in Stilwater, but all that notoriety didn’t go unnoticed. The syndicate has their eyes on the gang a legendary global organization has demanded the saints to pay tribute. Refusing to take a knee to the syndicate the saints take the fight to them on Steelport city destroy and dismantle the syndicate’s control of the city.

Overall there isn’t much more to say about Saints Row: The Third Remastered because, all in all, it’s the same game I loved back in 2011. Underneath a fairly fresh coat of paint is the same adrenaline-pumping, juvenile story of a gang-turned-media-sensation trying to rebuild itself. In that regard, assessed purely in a vacuum, this game is a smash hit. In context, though, I can’t help but feel this release is a bit premature.

There are remasters and then there are remasters. Some companies would have just taken Saints Row: The Third, tweaked the lighting a little, bundled it with all of its DLC and shoved it out on current-gen consoles with an improved resolution and called it a day. With Saints Row: The Third Remastered, however, Sperasoft and Volition have pretty much improved every single asset and implemented graphical features that make it stand shoulder-to-shoulder with the prettiest open world games available right now.