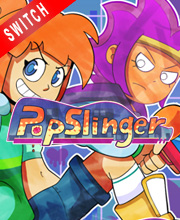 What is PopSlinger Game Code?

It's a digital key that allows you to download PopSlinger directly to Nintendo Switch directly from Nintendo eShop.

How can I find the best prices for PopSlinger on Nintendo Switch ?

Allkeyshop.com compares the cheapest prices of PopSlinger on the digital downloads market to find the best sales and discount codes on trusted stores.

Pop-slinger is a narrative-focused musical shooter that is inspired by the aesthetics of 80s and 90s retro culture, step into the shoes of Ria Carbon a stylish heroine on a quest to save the world from dastardly invaders from another dimension called the Corazones, backing her up is the Pop-slinger Gin! Fight people who have been corrupted all while grooving to a fully dynamic soundtrack that reacts to your performance in real-time.

It plays like a dream, looks gorgeous and its ’80s-infused new wave tunes are top-notch. Those who grew up in the ’80s or ’90s, or just have an affinity for that timeframe, will love the look and feel of PopSlinger as a whole.

Finally, what can I say? Well plenty, because it was a good game, just not that exciting or long-term entertaining. It’s missing a few things which could put it over the top. I feel it was a bit lacking in weapons, the use of our friend Gin, and even just the difficulty can be a bit much, especially with the final grading at the end.