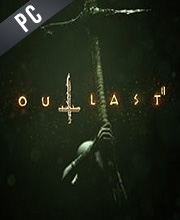 What is Outlast 2 CD key?

It's a digital key that allows you to download Outlast 2 directly to PC from the official Platforms.

How can I find the best prices for Outlast 2 CD keys?

A perfect storm of gore, atmosphere, tension, scripted and unscripted scares and a memorable plot that dares to explore darkness that can hide within the human psyche, what more can be said? Playing the game on even just normal mode for seven and a half hours was an inviting challenge of fear, misery, adrenaline, and despair which when combined together spells out fun in my book. The closest thing I can give to a negative is that the ending is a severe cliffhanger, and I hope to hear that Red Barrels will be tying up the story one way or another. I’m in love with a monster, and her name is Outlast 2.

Items included in this bundle:

Zoom 1m 3m 1y All
Track product
EPIC GAMES KEY : Region Free / Worldwide. Requires Epic Games Launcher App in order to play the game. You need to create a free account here in order to download Outlast 2 from Epic Plateform . Read the description on the store page about any language or country restrictions.
GOG.COM CD KEY : You need to register on Gog.com, then use the GOG Key to download and activate your game to play Outlast 2.
EU STEAM CD KEY: Requires an EUROPEAN IP address or you must activate it with a VPN (Virtual Private Network) in order to play Outlast 2. Might have languages restrictions or language packs. Read the description on the store game page to know if the EU IP is only needed for activation or for playing also (maybe on EU Servers). Most of the stores offer you their help, or show you how to do this with a tutorial to follow.
EUROPEAN STEAM GIFT : It’s a steam gift for Europe which requires an European IP address to activate and to play Outlast 2 on Steam. Read carefully the store description about region and language restrictions.
STEAM GIFT : A Steam gift is a one-time transfer you receive. You activate and install Outlast 2 to play on Steam, it is a non-refundable game that stays in your Steam games collection. Please read the store description about any language or region restrictions.
STEAM CD KEY : Use the Steam Key Code on Steam Platform to download and play Outlast 2. You must login to your Steam Account or create one for free. Download the (Steam Client HERE). Then once you login, click Add a Game (located in the bottom Left corner) -> Activate a Product on Steam. There type in your CD Key and the game will be activated and added to your Steam account game library.
Bundle
Bundle 1
Standard Edition
Compare Choose & Buy Download (803)

Scary as sh*t, this is a great example of how a good horror game should be like! Grab a key from G2A’s marketplace for a special price.

Cool and scary horror game I really like it !! 🙂 grr

I really like this game!!! It’s the best horror game by far! If you love to watch horror movies, then you have to play this game.