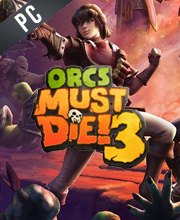 What is Orcs Must Die 3 CD key?

It's a digital key that allows you to download Orcs Must Die 3 directly to PC from the official Platforms.

How can I find the best prices for Orcs Must Die 3 CD keys?

Allkeyshop.com compares the cheapest prices of Orcs Must Die 3 on the digital downloads market to find the best sales and discount codes on trusted stores.

Prepare your defenses, the horde is returning bigger than ever in Orcs Must Die 3; the 3rd main series game of the orcs must die franchise made by Robot Entertainment. 20 years had passed since the re-establishment of the order lead by our former heroes Battlemage and Sorceress. The Order is a dedicated group of war mages who have made it their duty to protect the realm by guarding the rift against the other side making sure no orc passes into the human realm. Now it’s time for the newer generation to take the mantle, you play Kelsey and Egan on their journey to become heroes of their own right.

The Bundle Edition comes with the base game plus the game’s soundtrack.

EU STEAM CD KEY: Requires an EUROPEAN IP address or you must activate it with a VPN (Virtual Private Network) in order to play Orcs Must Die 3. Might have languages restrictions or language packs. Read the description on the store game page to know if the EU IP is only needed for activation or for playing also (maybe on EU Servers). Most of the stores offer you their help, or show you how to do this with a tutorial to follow.
EUROPEAN STEAM GIFT : It’s a steam gift for Europe which requires an European IP address to activate and to play Orcs Must Die 3 on Steam. Read carefully the store description about region and language restrictions.
STEAM GIFT : A Steam gift is a one-time transfer you receive. You activate and install Orcs Must Die 3 to play on Steam, it is a non-refundable game that stays in your Steam games collection. Please read the store description about any language or region restrictions.
STEAM CD KEY : Use the Steam Key Code on Steam Platform to download and play Orcs Must Die 3. You must login to your Steam Account or create one for free. Download the (Steam Client HERE). Then once you login, click Add a Game (located in the bottom Left corner) -> Activate a Product on Steam. There type in your CD Key and the game will be activated and added to your Steam account game library.
UNITED KINGDOM STEAM CD KEY : This is a Steam Game Code for Orcs Must Die 3 with English language only. Read the store's description for more information about language and country restriction.
Bundle
Standard Edition

I don`t know the first and second part but Orcs Must Die 3 looks cool and the gameplay is nice too. Discord Ro H.#1538

I played Orcs Must Die 1 and really enjoyed it. It’s like a tower defense type game but even better because you actually interact instead of sitting and watching the game play itself. (Discord: Kelig#0143)

I have been waiting for this one for long! I like this videogame saga

I liked playing the original Orcs Must Die!
But from what I can see – the 3rd installment doesn’t really bring anything new to the table, gameplay- and mechanics-wise. Doesn’t mean it’s not a good game of course, but means there’s little to no reason to play it if you already played the 1st or 2nd game.

Nice traps and soo exciting, dynamic, energic game. Can be nice to play coop with friends.