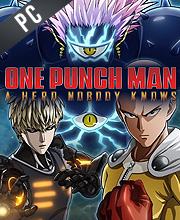 What is One Punch Man A Hero Nobody Knows CD key?

It's a digital key that allows you to download One Punch Man A Hero Nobody Knows directly to PC from the official Platforms.

How can I find the best prices for One Punch Man A Hero Nobody Knows CD keys?

Allkeyshop.com compares the cheapest prices of One Punch Man A Hero Nobody Knows on the digital downloads market to find the best sales and discount codes on trusted stores.

One Punch Man: A Hero Nobody Knows is an action-fighting game that is developed by Spike Chunsoft and published by Bandai Namco Entertainment. The game is based on the popular manga series called One Punch Man.

Offering a 3 versus 3 battle that has a “Hero Arrival” mechanic. The mechanic is actually only available to those using Saitama where in which he is late to the battle. Players would have to make do with the two other characters that they have chosen while waiting for Saitama to arrive.

As with the anime, Saitama is invisible and is the most powerful character around. This is true, but when faced with another Saitama, damage can be dealt, but, instead of hitting the ground when defeated by another Saitama, he will run-off to do something else.

There are a lot of different characters to choose from like Genos, Saitama, Mumen Rider, Hellish Blizzard, Speed-o’-Sound Sonic and so much more.

Its a pretty good game and fun to play ! Also I LOVE THE ANIME !!!

Im a HUGE FAN of this series..,May the game look the same thing as the anime!

I love the anime, I love anime, but I don’t think it’s up to it. Only for those who are super passionate.

One of the best series i watched,
im curious about the game. Hope to play it soon

I dont like the style of that anime. But thats a subjective opinion, I think.