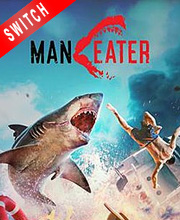 What is Maneater Game Code?

It's a digital key that allows you to download Maneater directly to Nintendo Switch directly from Nintendo eShop.

How can I find the best prices for Maneater on Nintendo Switch ?

Allkeyshop.com compares the cheapest prices of Maneater on the digital downloads market to find the best sales and discount codes on trusted stores.

US BOX GAME : This is an US import of Maneater Nintendo Switch in Box Edition (DVD-CD ROM). This is not a downloadable product. Please read the sellers page for any additional costs (taxes, shipping), delivery time for your country and languages available.
NINTENDO CODE : This is a digital code for Maneater Nintendo Switch. Use the download code on the Nintendo eShop of your Console. Once connected to the Nintendo eShop, you can enter and redeem the Download Code. Read carefully the store description about any language and region restrictions.
Standard Edition