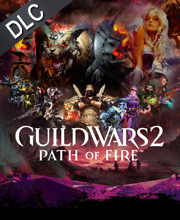 What is Guild Wars 2 Path of Fire CD key?

It's a digital key that allows you to download Guild Wars 2 Path of Fire directly to PC from the official Platforms.

How can I find the best prices for Guild Wars 2 Path of Fire CD keys?

Allkeyshop.com compares the cheapest prices of Guild Wars 2 Path of Fire on the digital downloads market to find the best sales and discount codes on trusted stores.

Guild Wars 2: Path of Fire continues the story with an imaginative and fun campaign filled with great character moments and a reverence for the world of Tyria that is infectious.

Welcome back to the best of the best, Guild Wars 2. Keep it up.

After searching for like an hour or so, i didn’t find any site cheapest than sites here.

did you also receive lvl 80 boost & the expansion hearth of thorns?

Looks like an amazing game , i cannot wait to buy it and play it with friends and family .