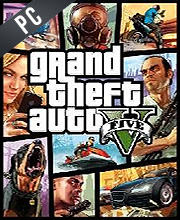 It's a digital key that allows you to download GTA 5 directly to PC from the official Platforms.

How can I find the best prices for GTA 5 CD keys?

Allkeyshop.com compares the cheapest prices of GTA 5 on the digital downloads market to find the best sales and discount codes on trusted stores.

Grand Theft Auto V is one of the most anticipated games for PC this year.

GTA 5 is packed with lots of hours of play and laughter, unforgettable missions, fun side objectives, planning heists and a huge immersive world to explore and discover.

If you hadn’t had a chance to play it yet at all though, and your computer can handle it, the PC version does definitely feel like the definitive version.

At the end of the day, this is still Grand Theft Auto V, an entry that I find is the best in the series, and a game that has been made that little bit better with the performance boost and graphical enhancements.

The Lost & Damned Play as Johnny who is a member of The Lost Motorcycle Club. You will experience what it is like to be a part of a biker gang.

The Ballad of Gay Tony

The Ballad of Gay Tony brings some classic fan favorite modes from GTA 5 multiplayer and overhauls it with and over-the-top experience.

The Doomsday Heist DLC is a three part heist sequence where you stop an apocalypse from unknown enemies.

Smuggler’s Run DLC will let you try out the smuggling business through the air. Smuggle in-demand narcotics or even high-value jewelry and air drop them to your clients.

Biker’s DLC opens up the Motorcycle Clubs to the elicit markets of Los Santos and Blaine County.

What is the store that accepts the payment method (Bank of Payeer)?

You can try to check each store if any of them accepts those payment methods.

AnyOne can get me gta v code of gta v please?
I really love this game.

i really hope that red dead redemption 2 won’t be heavily focused on multiplayer like GTA V. It fits GTA but RDR should be singleplayer focused

I bought GTA V as soon as it came out so I can play it online, yet I never played it online haha. The story was fun tho!