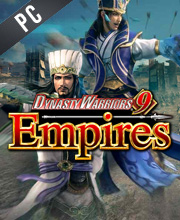 It's a digital key that allows you to download Dynasty Warriors 9 Empires directly to PC from the official Platforms.

How can I find the best prices for Dynasty Warriors 9 Empires CD keys?

EUROPEAN STEAM GIFT : It’s a steam gift for Europe which requires an European IP address to activate and to play Dynasty Warriors 9 Empires on Steam. Read carefully the store description about region and language restrictions.
STEAM GIFT : A Steam gift is a one-time transfer you receive. You activate and install Dynasty Warriors 9 Empires to play on Steam, it is a non-refundable game that stays in your Steam games collection. Please read the store description about any language or region restrictions.
STEAM CD KEY : Use the Steam Key Code on Steam Platform to download and play Dynasty Warriors 9 Empires. You must login to your Steam Account or create one for free. Download the (Steam Client HERE). Then once you login, click Add a Game (located in the bottom Left corner) -> Activate a Product on Steam. There type in your CD Key and the game will be activated and added to your Steam account game library.
Deluxe Edition
Standard Edition