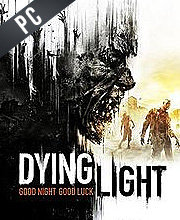 What is Dying Light CD key?

It's a digital key that allows you to download Dying Light directly to PC from the official Platforms.

How can I find the best prices for Dying Light CD keys?

Allkeyshop.com compares the cheapest prices of Dying Light on the digital downloads market to find the best sales and discount codes on trusted stores.

Stuck in a chaotic and dangerous world, the player’s mission is to survive and live another day. During the day, players roam the city infested by hordes of infested zombies, gather supplies, and craft weapons to fight the undead created by a mysterious disease.

At night, the tables will turn and the hunter becomes the hunted as the infected become faster, stronger and a more aggressive. Infected ones don’t pose much of a threat but there are nocturnal, inhuman and powerful predators stalking you and ready to jump in on you anytime.

The game is set in the city of Harran, a mysterious epidemic has transformed most of the population into aggressive zombies, forcing Harran‘s Defense to seclude the city from the rest of the world.

Players will take on the role of Kyle Crane, an operative sent to infiltrate the quarantine area in the city; his mission is to find Kadir “Rais” Suleiman, a politician gone rogue who possesses a dangerous file that could destroy the reputation of the agency. He must make a decision of completing the mission or assisting the survivors.

Dying Light features amazing gameplay, astonishing visuals, and freedom of movement. Players can either hunt or escape hunters in the most stylish way possible. Players are also able to jump between rooftops, scale walls, and bash foes from above. This freedom of movement makes going to and fro a whole lot faster and easier.

Do you have what it takes to survive the night?

Bonus: Dying Light + The DLC Be the zombie (Can be different or change over time for each seller. Please refer to the seller’s website)

GOG.COM CD KEY : You need to register on Gog.com, then use the GOG Key to download and activate your game to play Dying Light.
EU STEAM CD KEY: Requires an EUROPEAN IP address or you must activate it with a VPN (Virtual Private Network) in order to play Dying Light. Might have languages restrictions or language packs. Read the description on the store game page to know if the EU IP is only needed for activation or for playing also (maybe on EU Servers). Most of the stores offer you their help, or show you how to do this with a tutorial to follow.
EUROPEAN STEAM GIFT : It’s a steam gift for Europe which requires an European IP address to activate and to play Dying Light on Steam. Read carefully the store description about region and language restrictions.
STEAM GIFT : A Steam gift is a one-time transfer you receive. You activate and install Dying Light to play on Steam, it is a non-refundable game that stays in your Steam games collection. Please read the store description about any language or region restrictions.
STEAM CD KEY : Use the Steam Key Code on Steam Platform to download and play Dying Light. You must login to your Steam Account or create one for free. Download the (Steam Client HERE). Then once you login, click Add a Game (located in the bottom Left corner) -> Activate a Product on Steam. There type in your CD Key and the game will be activated and added to your Steam account game library.
STEAM KEY ROW : It means for Rest Of the World countries which are not concerned by the region restrictions. This product can't be purchased and activated in Several countries. Please read the store description to know the full list of countries which are concerned. Use the key to Download and play Dying Light on Steam.
Bonus Edition
Bundle
Enhanced Edition
Platinum Edition
Standard Edition
Ultimate Collection
Uncut Edition

Reminds me of the dead island games just higher quality. this is alot of fun atleast until now. I have only played about 2h tho

This is the only game that never gets me bored great game and great updates.