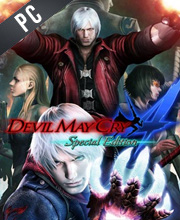 What is Devil May Cry 4 Special Edition CD key?

It's a digital key that allows you to download Devil May Cry 4 Special Edition directly to PC from the official Platforms.

How can I find the best prices for Devil May Cry 4 Special Edition CD keys?

Allkeyshop.com compares the cheapest prices of Devil May Cry 4 Special Edition on the digital downloads market to find the best sales and discount codes on trusted stores.

The Special Edition allows players to control one out of five playable characters, three of which are new ones. The three new playable characters are: Vergil – a strong technical character; Lady – specilaizes in powerful long-distance attacks; and Trish – a character who uses the demonic sword Sparda.

The game pretty much has the same plot as DMC4 as it follows the story of the new protagonist, Nero, a young demon hunter who works for The Order of the Sword – those that worship the Legendary Dark Knight Sparda as a god. He was given the task to find Dante, the assassin who murdered the leader of the Order of the Sword.

As more and more demons begin to appear throughout the city, Nero will soon discover the motives behind Dante’s appearance, as well as the truth behind the Order of the Sword’s intentions.

You will play as Nero most of the time throughout game, equipped with the Red Queen sword, Blue Rose revolver, and his Devil Bringer. Nero’s Red Queen is equipped with an Exceed Gauge which can be charged up to allow Nero to unleash subsequent attacks more powerful than regular ones until the gauge gets emptied.

The Devil Bringer can be used to pull Nero towards and away from enemies as well as throw attacks with high damage and various effects depending on which type of enemy he’s facing. The Devil Bringer also gains new abilities such as detecting secret missions. In some parts of the game, the player will also be able to control Dante.

In terms of gameplay, small adjustments have been made to improve the gameplay tempo and some features are here to make a comeback. Players will get to enjoy the game’s signature blend of guns and swordplay. Its combo system will reward players with stylish dispatching of enemies. All characters also have distinct set of weaponry and moves.

EU STEAM CD KEY: Requires an EUROPEAN IP address or you must activate it with a VPN (Virtual Private Network) in order to play Devil May Cry 4 Special Edition. Might have languages restrictions or language packs. Read the description on the store game page to know if the EU IP is only needed for activation or for playing also (maybe on EU Servers). Most of the stores offer you their help, or show you how to do this with a tutorial to follow.
STEAM CD KEY : Use the Steam Key Code on Steam Platform to download and play Devil May Cry 4 Special Edition. You must login to your Steam Account or create one for free. Download the (Steam Client HERE). Then once you login, click Add a Game (located in the bottom Left corner) -> Activate a Product on Steam. There type in your CD Key and the game will be activated and added to your Steam account game library.
STEAM KEY ROW : It means for Rest Of the World countries which are not concerned by the region restrictions. This product can't be purchased and activated in Several countries. Please read the store description to know the full list of countries which are concerned. Use the key to Download and play Devil May Cry 4 Special Edition on Steam.
EU XBOX ONE GAME CODE : Xbox Live Game Code for EUROPE ONLY. Use the Digital Code received by mail in your Xbox One account to download Devil May Cry 4 Special Edition from the Xbox Live. Internet connection is required. Please read the store description about any language or region restrictions.
Standard Edition
Compare Choose & Buy Download (583)

A great game, one of the best entries in the DMC series.

Love this game !! And http://www.allkeyshop.com is the place to buy it from !! I have bought many games from here, and i was always satisfied with the quality and swiftness of the service!

Kinguin is the best store and here, with a very good price 😉

A really superb title in DMC series, loved to play Devil May Cry 4, was really great and would love to play again this Special Edition with the new bonuses, I would enjoy once again to play it =)
Best store for me it has to be Gamesrocket.com for its price.

Kinguin, because it’s what im most familiar with.