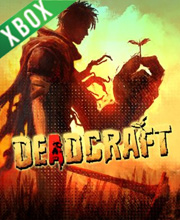 What is DEADCRAFT Game Code?

It's a digital key that allows you to download DEADCRAFT directly to Xbox One from Xbox Live.

How can I find the best prices for DEADCRAFT on Xbox one?

Allkeyshop.com compares the cheapest prices of DEADCRAFT on the digital downloads market to find the best sales and discount codes on trusted stores.

Deadcraft is an isometric zombie survival RPG with crafting and farming elements developed by Marvelous Inc. known for their work on the Story of Seasons series and Fate/Extella. In a world ravaged by a zombie apocalypse caused by a deadly virus, you must survive as the half-zombie/half-human Reid, use anything you can get your hands of to fend off your enemies like an ax, weedwhacker, and even the dead themselves by harvesting them and planting them to make your own zombie army.

This Edition of DEADCRAFT contains the base game plus the deluxe edition pack which contains cosmetic items, resource packs, and two meaty day-one DLCs.