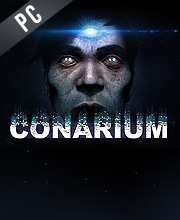 What is Conarium CD key?

It's a digital key that allows you to download Conarium directly to PC from the official Platforms.

How can I find the best prices for Conarium CD keys?

Allkeyshop.com compares the cheapest prices of Conarium on the digital downloads market to find the best sales and discount codes on trusted stores.

Conarium is an adventure video game developed by Zoetrope Interactive and published by Iceberg Interactive. This is a Lovecraftian game, inspired by H.P. Lovecraft’s “At The Mountains of Madness”.

Play as Frank Gilman who wakes up without any memory in the Arctic base in Upuaut near the south pole. The base is absolutely deserted with a feeling of something very wrong happening. You actually find out that you have died momentarily and was brought back to life but completely changed. You then have strange memories that you are not sure you own, memories of places that you are not sure you have been.

Explore not only the Antarctic base but also your dreams and visions. Unlock the secrets by studying the clues around you. Through all these, be weary of the macabre beings.

Get to enjoy the game’s graphics created by the Unreal 4 engine. Finish all the multiple endings available in the game and relish the game’s haunting and atmospheric soundtracks.

Challenge what is normally considered as the ‘absolute’ limits of nature in Conarium.

EPIC GAMES KEY : Region Free / Worldwide. Requires Epic Games Launcher App in order to play the game. You need to create a free account here in order to download Conarium from Epic Plateform . Read the description on the store page about any language or country restrictions.
GOG.COM CD KEY : You need to register on Gog.com, then use the GOG Key to download and activate your game to play Conarium.
EU STEAM CD KEY: Requires an EUROPEAN IP address or you must activate it with a VPN (Virtual Private Network) in order to play Conarium. Might have languages restrictions or language packs. Read the description on the store game page to know if the EU IP is only needed for activation or for playing also (maybe on EU Servers). Most of the stores offer you their help, or show you how to do this with a tutorial to follow.
EUROPEAN STEAM GIFT : It’s a steam gift for Europe which requires an European IP address to activate and to play Conarium on Steam. Read carefully the store description about region and language restrictions.
STEAM GIFT : A Steam gift is a one-time transfer you receive. You activate and install Conarium to play on Steam, it is a non-refundable game that stays in your Steam games collection. Please read the store description about any language or region restrictions.
STEAM CD KEY : Use the Steam Key Code on Steam Platform to download and play Conarium. You must login to your Steam Account or create one for free. Download the (Steam Client HERE). Then once you login, click Add a Game (located in the bottom Left corner) -> Activate a Product on Steam. There type in your CD Key and the game will be activated and added to your Steam account game library.
Bundle
Standard Edition

This game is a blast. Excellent, will enjoy so much time playing it.