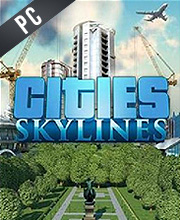 What is Cities Skylines CD key?

It's a digital key that allows you to download Cities Skylines directly to PC from the official Platforms.

How can I find the best prices for Cities Skylines CD keys?

Allkeyshop.com compares the cheapest prices of Cities Skylines on the digital downloads market to find the best sales and discount codes on trusted stores.

This is a city simulation at its finest! Cities: Skylines, a simulation/strategy game developed by Colossal Order Ltd. and published by Paradox Interactive.

The finest city builder in over a decade, Cities: Skylines’s few flaws are so minor I only noticed them after hours of enjoyment.

The city builder is back! Colossal Order has succeeded where others have failed. Cities: Skylines is a brilliant game.

The Complete Edition comes with the base game, After Dark, Snowfall and an exclusive bonus item.

The Bonus Edition includes the base game plus After Dark

The Platinum Edition includes the base game, After Dark, Snowfall and Mass Transit

Cities Skylines Content Creator Pack Modern Japan brings a unique Japan flair with Japanese architecture with 20 buildings and six props from the modder Ryuichi Kaminogi. Some of the buildings included are skyscrapers and ramen shops.

Find all the best prices for Cities Skylines DLCs on Allkeyshop!

ARGENTINA XBOX GAME CODE : Xbox Live Game Code for ARGENTINA ONLY. Use the Digital Code received by mail in your Xbox account to download Cities Skylines from the Xbox Live. Internet connection is required. Please read the store description about any language or region restrictions.
EPIC GAMES KEY : Region Free / Worldwide. Requires Epic Games Launcher App in order to play the game. You need to create a free account here in order to download Cities Skylines from Epic Plateform . Read the description on the store page about any language or country restrictions.
EU STEAM CD KEY: Requires an EUROPEAN IP address or you must activate it with a VPN (Virtual Private Network) in order to play Cities Skylines. Might have languages restrictions or language packs. Read the description on the store game page to know if the EU IP is only needed for activation or for playing also (maybe on EU Servers). Most of the stores offer you their help, or show you how to do this with a tutorial to follow.
EUROPEAN STEAM GIFT : It’s a steam gift for Europe which requires an European IP address to activate and to play Cities Skylines on Steam. Read carefully the store description about region and language restrictions.
STEAM GIFT : A Steam gift is a one-time transfer you receive. You activate and install Cities Skylines to play on Steam, it is a non-refundable game that stays in your Steam games collection. Please read the store description about any language or region restrictions.
STEAM CD KEY : Use the Steam Key Code on Steam Platform to download and play Cities Skylines. You must login to your Steam Account or create one for free. Download the (Steam Client HERE). Then once you login, click Add a Game (located in the bottom Left corner) -> Activate a Product on Steam. There type in your CD Key and the game will be activated and added to your Steam account game library.
STEAM KEY ROW : It means for Rest Of the World countries which are not concerned by the region restrictions. This product can't be purchased and activated in Several countries. Please read the store description to know the full list of countries which are concerned. Use the key to Download and play Cities Skylines on Steam.
Windows 10 Global : This is an Worldwide Microsoft code to play on PC for Worldwide . You need to have installed Windows 10 Anniversary Edition update on your PC. Log into your Microsoft account to download and play. Read closely the description given by the store to activate your game.
Bonus Edition
Bundle
Bundle 1
Collection
Complete Edition
Deluxe Edition
Mayor's Edition
Platinum Edition
Premium Edition
Standard Edition
Compare Choose & Buy Download (689)

The best city building game for such a low price, definitely recommended!

Best game i ever played, so creative, so many options it never gets board

I’ve never played a better and more realistic city simulator before. Love the ability to control districts and policies for each district.