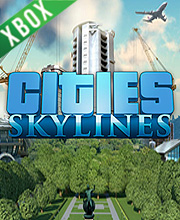 What is Cities Skylines Game Code?

It's a digital key that allows you to download Cities Skylines directly to Xbox One from Xbox Live.

How can I find the best prices for Cities Skylines on Xbox one?

Allkeyshop.com compares the cheapest prices of Cities Skylines on the digital downloads market to find the best sales and discount codes on trusted stores.

This is a city simulation at its finest! Cities: Skylines, a simulation/strategy game developed by Colossal Order Ltd. and published by Paradox Interactive.

The mayoral planning fantasy is still intact with this version, and now easier than ever to get into. Simply put, if you’re an Xbox One owner who is a fan of city-building simulation games, you need to check out Cities: Skylines.

Make no mistake: Cities: Skylines is still pretty fun. It’s deep enough so that people who thrive on depth and complexity will find more than enough to sink their teeth into, while the more shallow among us (i.e. people like me) who just want to build huge megalopolises without putting too much though into it can do that too.

If you love taking charge, want to manage worlds, balance budgets and take on a heavy load in your quest to become god, then this is the game for you.

Cities Skylines Mayor’s edition offers everything you need to take your city building to newer heights! Together with the base game, this bundle contains the Season Pass 1 and Season Pass 2

Cities Skylines Content Creator Pack Modern Japan brings a unique Japan flair with Japanese architecture with 20 buildings and six props from the modder Ryuichi Kaminogi. Some of the buildings included are skyscrapers and ramen shops.

Find all the best prices for Cities Skylines DLCs on Allkeyshop!