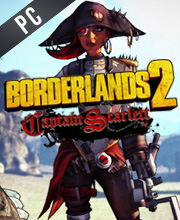 It's a digital key that allows you to download Borderlands 2 Captain Scarlett directly to PC from the official Platforms.

How can I find the best prices for Borderlands 2 Captain Scarlett CD keys?

Allkeyshop.com compares the cheapest prices of Borderlands 2 Captain Scarlett on the digital downloads market to find the best sales and discount codes on trusted stores.

Borderlands 2: Captain Scarlett and The Booty Pirate is an extension for the Borderland 2 game an FPS / RPG genre, developed by Gearbox Software and published by 2K Games and adds a small story content without meeting the players.

Gearbox offers us once again an extension that has everything to be called a game in its own right as the size of the map is huge and contains multiple unusual locations such caves, villages shaped atoll, an old lighthouse, abandoned pirate ships, forming a mixture of desert pirates scenery, wilderness but not in terms of action.

I want to show the appearance of a new vehicle from the beginning of the adventure. You’ll also find special characters with a singular and surprising personalities, specific to the atmosphere of the Borderlands, as well as its array of various weapons and still as abundant treasure chests filled with rare weapons that will bring joy to amateurs and even advanced players.

Adventurers in glory quests will approach the city of Oasis and its surroundings as early as level 15 in pursuit of a safe coveted by Captain Scarlett. You will be accompanied by Shade who in addition to being a source of well zany side quests, never stopped to consider you as his “buddy” who will send you to meet two guys: The Invincible and Hyperius Master Gee, both level 50 and to be faced as a group and we end up with the pleasure of the pirated versions of Goliaths equipped with anchor and formidable in close combat. Forward sailors, take collision this new world just waiting to reveal its secrets we, for our greatest pleasure.

EU STEAM CD KEY: Requires an EUROPEAN IP address or you must activate it with a VPN (Virtual Private Network) in order to play Borderlands 2 Captain Scarlett. Might have languages restrictions or language packs. Read the description on the store game page to know if the EU IP is only needed for activation or for playing also (maybe on EU Servers). Most of the stores offer you their help, or show you how to do this with a tutorial to follow.
STEAM GIFT : A Steam gift is a one-time transfer you receive. You activate and install Borderlands 2 Captain Scarlett to play on Steam, it is a non-refundable game that stays in your Steam games collection. Please read the store description about any language or region restrictions.
STEAM CD KEY : Use the Steam Key Code on Steam Platform to download and play Borderlands 2 Captain Scarlett. You must login to your Steam Account or create one for free. Download the (Steam Client HERE). Then once you login, click Add a Game (located in the bottom Left corner) -> Activate a Product on Steam. There type in your CD Key and the game will be activated and added to your Steam account game library.
Complete Edition
DLC
Game Of The Year Edition
Compare Choose & Buy Download (710)