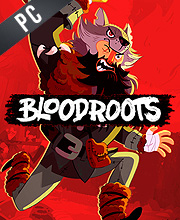 What is Bloodroots CD key?

It's a digital key that allows you to download Bloodroots directly to PC from the official Platforms.

How can I find the best prices for Bloodroots CD keys?

Allkeyshop.com compares the cheapest prices of Bloodroots on the digital downloads market to find the best sales and discount codes on trusted stores.

Bloodroots is an action video game that is developed and published by Paper Cult.

As Mr. Wolf, you have been betrayed and left for dead. Since you have survived, all that you can think about is revenge even though you are greatly outnumbered.

Set in the Weird West, your weapon would be anything and everything that is around you like ladders, hatchets and even unseemly weapons like carrots. Create combos as you take out each and every opponent that stands in your way as you try to figure out the reason that you have been betrayed.

Offering a world that is full of makeshift weapons to use on your enemies. Create a bunch of combos that are worthy to top leaderboards. Go through different handcrafted levels that range from forests and even mountain tops.

You have never played anything like this with a deranged cast of characters as well as a twisted tale of revenge set in the west.

In Bloodroots, one must improvise or one will perish!

EPIC GAMES KEY : Region Free / Worldwide. Requires Epic Games Launcher App in order to play the game. You need to create a free account here in order to download Bloodroots from Epic Plateform . Read the description on the store page about any language or country restrictions.
STEAM CD KEY : Use the Steam Key Code on Steam Platform to download and play Bloodroots. You must login to your Steam Account or create one for free. Download the (Steam Client HERE). Then once you login, click Add a Game (located in the bottom Left corner) -> Activate a Product on Steam. There type in your CD Key and the game will be activated and added to your Steam account game library.
PC Win 10 / Xbox Key. Digital code which allows you to play on both Xbox and Windows 10 PC. See below for more informations.
Standard Edition

Everything can be used as a weapon: from vegetables to furniture to huge shoes