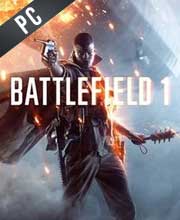 What is Battlefield 1 CD key?

It's a digital key that allows you to download Battlefield 1 directly to PC from the official Platforms.

How can I find the best prices for Battlefield 1 CD keys?

Allkeyshop.com compares the cheapest prices of Battlefield 1 on the digital downloads market to find the best sales and discount codes on trusted stores.

Battlefield 1 is a first person shooter that is developed by EA DICE and published by Electronic Arts. This is the fourteenth installment of the long running franchise Battlefield.

The game is set in the period of World War 1 and everything will be authentic to that era, from weapons to vehicles. The World War 1 weapons that you will play in the game range from mustard gas, flamethrowers, artillery, automatic and semiautomatic rifles and bolt action rifles.

Aside from these long range weapons, short range or close combat melee weapons were also introduced. The melee weapons would have a light and heavy class as well. Examples of these are sabres, trench clubs and shovels.

Aside from World War 1 weapons, you can also expect authentic vehicles that are from that era. You will be able to ride horses to battle as well as battleships, armored trucks, biplane aircrafts and light and heavy tanks.

Battlefield 1 will also sport a huge campaign mode. Having more options in approaching the game’s combat and completing its levels. You will also have the option to control several players in the game mode.

The multiplayer mode is also vast and now with a squad system that will allow groups of players to join or leave the servers together. It also supports up to 64 players.

Maps available will be the historic places from World War 1 which includes the Alps, the Western Front and Arabia.

It will also feature destructible environments, where once a location or an object is hit it will remain destroyed throughout the game. You will also be able to customize weapons to your liking.

Looks like a good game, hopefully can pick it up sometime for a nice price.

So emerisive , one of the bet shooter of all time.

Incredible game. Campaign is fantastic, the ambietation excellent, you feel the Great World on your blood. Multiplayer seems very well, I haven’t tried it for now, but one day of those I will go on!

One of best game made by EA, it’s a great game and price is so low

this game so good one of my favourite battlefield games after battlefield 3 good story line multiplayer maps are so good dlcs too get that cheap and jump into the game. multiplayer still so alive.