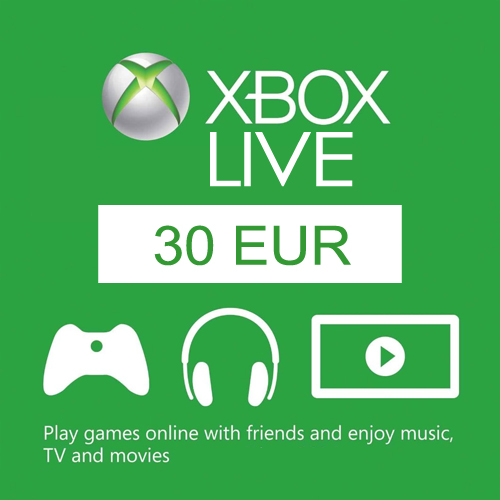 It's a digital key that allows you to download 30 Euro Xbox Live EU Card directly to PC from the official Platforms.

How can I find the best prices for 30 Euro Xbox Live EU Card CD keys?

Thanks to 30 Euro Xbox Live EU Card , you can play and share with your friends but also rent movies, listen to music, access YouTube or Dailymotion, and even watch live TV.

XBOX LIVE PREPAID CARD (MICROSOFT GIFT CARD and XBOX LIVE GIFT CARD) : Xbox Live CARD / MICROSOFT CARDS add money to your MICROSOFT ACCOUNT. You MUST buy the currency compatible with your country! (Example : EUR for EUROPE, USD for United States of America, GBP for British Accounts...). Redeem the Card code for Xbox Live 30 Euros Card EU on your MICROSOFT ACCOUNT to add the full value on your Account Balance in order to buy Xbox One games / Xbox 360 games, additional contents to games, Xbox Live Subscription purchase, rent the latest movies in High Definition on your TV, tablet and Smartphone, and other products in the Xbox Live Marketplace.

Standard Edition. Read the store description to know the content.

Be the first one to write a review about 30 Euro Xbox Live EU Card !