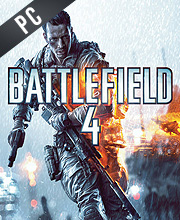 What is Battlefield 4 CD key?

It's a digital key that allows you to download Battlefield 4 directly to PC from the official Platforms.

How can I find the best prices for Battlefield 4 CD keys?

Battlefield 4 is an excellent multiplayer game that makes the most of its ambitions, proving once again that destruction is a valuable strategic addition to competitive combat, which reaches its full potential with two killer Commanders are bringing out the best in their squads.

It’s frustrating to see the same developer who gave us the decent campaigns of the Bad Company games continue to fall flat with the story modes in the core titles. But while it feels as if DICE is standing still while the industry passes them by in terms of single-player experiences, they continue to innovate and raise the bar for multiplayer warfare.

Find all the best prices for Battlefield 4 DLC’s on Allkeyshop!
Loading offers...
There's currently no offer for this game.
Show more offers Show all offers