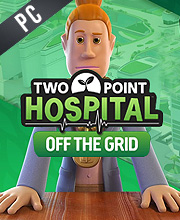 What is Two Point Hospital Off the Grid CD key?

It's a digital key that allows you to download Two Point Hospital Off the Grid directly to PC from the official Platforms.

How can I find the best prices for Two Point Hospital Off the Grid CD keys?

Allkeyshop.com compares the cheapest prices of Two Point Hospital Off the Grid on the digital downloads market to find the best sales and discount codes on trusted stores.

Two Point Hospital: Off the Grid is a simulation strategy game developed by Two Point Studios and published by SEGA.

This is a downloadable content so the base game which is Two Point Hospital is needed to play the game.

You must support the initiative of Two Point Country’s mayor Tabitha Windstock. According to research the number one issue or everyone’s mind is the environment. With the mayor wanting to stay in office she then adds rivers and forests on the map.

For support, you must take care of the recently green and pro-Windstock community in an eco-friendly way. There will also be new illnesses for you to cure like the Harebrained, Root Snoot, Green Fingers, Ramshackled, Perforated Thoughts, Bodily Druids, Tenderbox and so much more.

You must keep an eye on the “Wellness Index” which comes with six criteria which are staff and patient happiness; attractiveness; hygiene; reputation; and cure rate.

Another thing is that you must build your medical herb gardens as you won’t be able to heal your patients using chemicals. They won’t have any of it, so you must get-a-planting.

Also, the means to power your hospital should be “green” like solar panels, wind turbines, and hydro dams. The more power that you can generate, the more rooms you can open in your hospital.

It is a huge change, but if its for a “greener” earth, then why not!