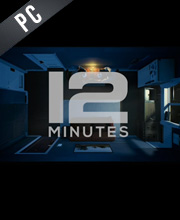 What is Twelve Minutes CD key?

It's a digital key that allows you to download Twelve Minutes directly to PC from the official Platforms.

How can I find the best prices for Twelve Minutes CD keys?

You and your wife are at home for what is supposed to be a romantic evening that turns into tragedy. A police detective barges into your home and says that your wife is a murderer and beats you up until you die.

You then wake up 12 minutes earlier to experience the same thing! With the knowledge that you have gathered, what will you do to change the outcome to hopefully break the loop?

Twelve Minutes was one of the most interactive and enjoyable games I’ve played in a long while. Even though playing through the same loop again, and again, and again won’t be for everyone, I found the process of changing up my actions each time and moving forward, little by little, to be oddly satisfying, and the sense of accomplishment whenever I made a considerable leap forward was unmatched.

12 Minutes is easily one of the best games of the year. I was surprised by how quickly it grabbed me, and it maintained that hold until the end. It feels like nearly every loop ends with an exciting cliffhanger that leaves you rushing to start the cycle over again. It can be a bit difficult to maintain focus when you’re stuck on a puzzle and you find yourself beating your head against the wall in search of a solution, but those breakthrough moments are more than worth the trouble.

attack of the fanboy

EU STEAM CD KEY: Requires an EUROPEAN IP address or you must activate it with a VPN (Virtual Private Network) in order to play Twelve Minutes. Might have languages restrictions or language packs. Read the description on the store game page to know if the EU IP is only needed for activation or for playing also (maybe on EU Servers). Most of the stores offer you their help, or show you how to do this with a tutorial to follow.
EUROPEAN STEAM GIFT : It’s a steam gift for Europe which requires an European IP address to activate and to play Twelve Minutes on Steam. Read carefully the store description about region and language restrictions.
STEAM GIFT : A Steam gift is a one-time transfer you receive. You activate and install Twelve Minutes to play on Steam, it is a non-refundable game that stays in your Steam games collection. Please read the store description about any language or region restrictions.
STEAM CD KEY : Use the Steam Key Code on Steam Platform to download and play Twelve Minutes. You must login to your Steam Account or create one for free. Download the (Steam Client HERE). Then once you login, click Add a Game (located in the bottom Left corner) -> Activate a Product on Steam. There type in your CD Key and the game will be activated and added to your Steam account game library.
STEAM KEY ROW : It means for Rest Of the World countries which are not concerned by the region restrictions. This product can't be purchased and activated in Several countries. Please read the store description to know the full list of countries which are concerned. Use the key to Download and play Twelve Minutes on Steam.
PC Win 10 / Xbox Key. Digital code which allows you to play on both Xbox and Windows 10 PC. See below for more informations.
European PC Win 10 / Xbox Key. Digital code for EUROPE which allows you to play on both Xbox and Windows 10 PC in EUROPE. See below for more informations.
Standard Edition

This game looks so Awesome, can’t wait for it to be released (Discord: Mohammad Ali Deraz#9231)