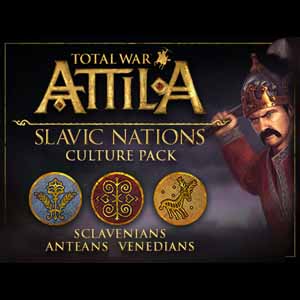 It's a digital key that allows you to download Total War ATTILA Slavic Nations Culture Pack directly to PC from the official Platforms.

EU STEAM CD KEY: Requires an EUROPEAN IP address or you must activate it with a VPN (Virtual Private Network) in order to play Total War ATTILA Slavic Nations Culture Pack. Might have languages restrictions or language packs. Read the description on the store game page to know if the EU IP is only needed for activation or for playing also (maybe on EU Servers). Most of the stores offer you their help, or show you how to do this with a tutorial to follow.
STEAM GIFT : A Steam gift is a one-time transfer you receive. You activate and install Total War ATTILA Slavic Nations Culture Pack to play on Steam, it is a non-refundable game that stays in your Steam games collection. Please read the store description about any language or region restrictions.
STEAM CD KEY : Use the Steam Key Code on Steam Platform to download and play Total War ATTILA Slavic Nations Culture Pack. You must login to your Steam Account or create one for free. Download the (Steam Client HERE). Then once you login, click Add a Game (located in the bottom Left corner) -> Activate a Product on Steam. There type in your CD Key and the game will be activated and added to your Steam account game library.
STEAM KEY ROW : It means for Rest Of the World countries which are not concerned by the region restrictions. This product can't be purchased and activated in Several countries. Please read the store description to know the full list of countries which are concerned. Use the key to Download and play Total War ATTILA Slavic Nations Culture Pack on Steam.
DLC

Let me say this right now, these guys have some of the hardest opening turns of any faction. By turn five I was at war with three of the Steppe minor factions, praying the Huns themselves didn’t declare war. I was down to one city and one army. Luckily I fortified that city to the max with garrisons and my sole army. Eventually all of the Huns randomly decided to call for peace and I was free to build. I reclaimed several razed settlements and attacked the weak nation of Arran to the east. Easily taking over two entire provinces. It was quite rewarding surviving brutal early turns and then quickly growing into a decent sized nation. So onto an actual review.