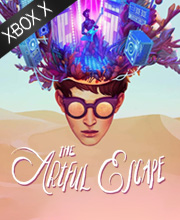 What is The Artful Escape Game Code?

It's a digital key that allows you to download The Artful Escape directly to Xbox Series X from Xbox Live.

How can I find the best prices for The Artful Escape on Xbox Series X ?

The Artful Escape is beautiful, sad, compelling, and mind-blowing in equal measure. It’s more of a concept album than it is a game and that’s fine, because, with so many set-pieces, such well-realized vignettes, and such awe-inspiring talent behind it, you’re more than happy to sit down and take in the journey as your fingers dance on the pad from time to time to keep the game moving forward.

This one’s a no-brainer; The Artful Escape is on Xbox Game Pass and you absolutely, positively have no reason to miss it if you’re a subscriber. If you’re not and you enjoy warm fuzzies, either get on board or buy it outright as you won’t be disappointed.