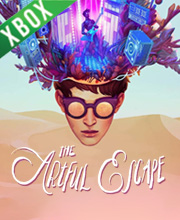 What is The Artful Escape Game Code?

It's a digital key that allows you to download The Artful Escape directly to Xbox One from Xbox Live.

How can I find the best prices for The Artful Escape on Xbox one?

The Artful Escape has made me smile like nothing else. I can still feel the beaming grin on my face as I type these words. It’s the one game in 2021 that I really couldn’t put down as the clock ticked past midnight and I knew I had to get my head down, the one game where I knew what was coming next would be unmissable.

The Artful Escape is by turns psychedelic, moving, exultant, and lovely. The central metaphor of a young performer bringing fantastic new worlds into existence through the art of music is a powerful one, and while the theme of a struggling musician finding his authentic voice while paying homage to the past might not be a new one, it’s certainly new to videogames.