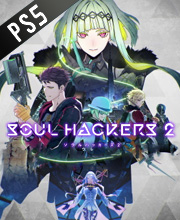 It's a digital key that allows you to download Soul Hackers 2 directly to Playstation 5 from PSN (PlayStation Network).

How can I find the best prices for Soul Hackers 2 on Playstation 5 ?

The Deluxe Edition comes with the base game, bonus story arc, item pack and the pre-order bonus.

The Premium Edition comes with what the Deluxe Edition includes plus some additional stuff.