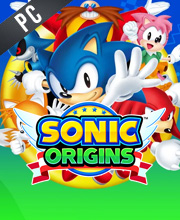 What is Sonic Origins CD key?

It's a digital key that allows you to download Sonic Origins directly to PC from the official Platforms.

How can I find the best prices for Sonic Origins CD keys?

Allkeyshop.com compares the cheapest prices of Sonic Origins on the digital downloads market to find the best sales and discount codes on trusted stores.

Sonic Origins is an action-adventure 2D platformer game developed by SEGA entertainment, relive the classic adventures of Sonic the Hedgehog and friends in this ultimate bundle that contains Sonic the Hedgehog, Sonic the Hedgehog 2, Sonic 3 & Knuckles, and Sonic CD fully remastered. From the iconic Green Hill Zone to the treacherous Death Egg Robot, thwart Dr. Robotnik’s plan whilst in polished high definition! This version also includes new areas for you to explore, additional animations, and a brand-new anniversary game mode.

In all Sonic Origins is a good way to experience the original four Sonic the Hedgehog outings, but it isn’t without its issues, namely the locked content and the occasional glitch. This reviewer recommends Origins to anyone that’s a fan of classic platformers, or is a fan of collections that include never before seen art of the Blue Blur and his friends and foes from the Genesis/CD era!

Sonic Origins is an essential collection not only for any franchise fan with current or last-gen gaming hardware but also for anybody who appreciates tight gameplay with a banger soundtrack. Sonic is the ultimate “Animal With an Attitude” mascot still having major games released to this day, and while the franchise has had a tarnished reputation due to sub-par releases lately, it remains plucky and pushes forward, never losing sight of its roots. 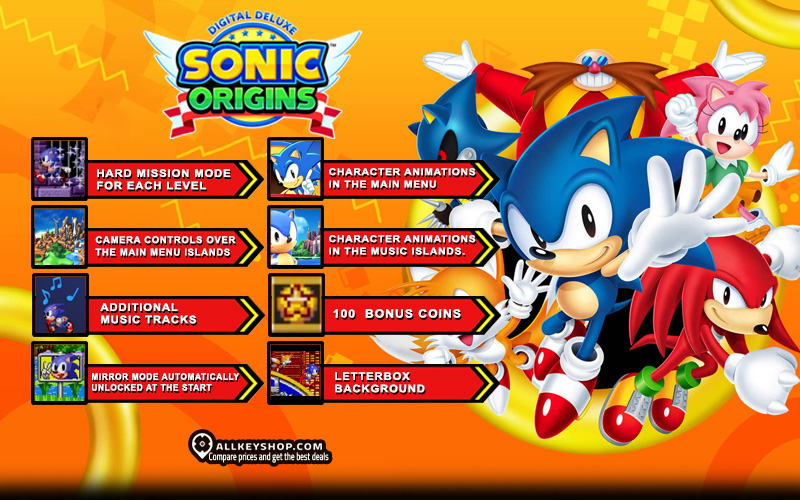 EPIC GAMES KEY : Region Free / Worldwide. Requires Epic Games Launcher App in order to play the game. You need to create a free account here in order to download Sonic Origins from Epic Plateform . Read the description on the store page about any language or country restrictions.
EU STEAM CD KEY: Requires an EUROPEAN IP address or you must activate it with a VPN (Virtual Private Network) in order to play Sonic Origins. Might have languages restrictions or language packs. Read the description on the store game page to know if the EU IP is only needed for activation or for playing also (maybe on EU Servers). Most of the stores offer you their help, or show you how to do this with a tutorial to follow.
STEAM GIFT : A Steam gift is a one-time transfer you receive. You activate and install Sonic Origins to play on Steam, it is a non-refundable game that stays in your Steam games collection. Please read the store description about any language or region restrictions.
STEAM CD KEY : Use the Steam Key Code on Steam Platform to download and play Sonic Origins. You must login to your Steam Account or create one for free. Download the (Steam Client HERE). Then once you login, click Add a Game (located in the bottom Left corner) -> Activate a Product on Steam. There type in your CD Key and the game will be activated and added to your Steam account game library.
STEAM KEY ROW : It means for Rest Of the World countries which are not concerned by the region restrictions. This product can't be purchased and activated in Several countries. Please read the store description to know the full list of countries which are concerned. Use the key to Download and play Sonic Origins on Steam.
Deluxe Edition
Standard Edition
Compare Choose & Buy Download (723)

Seen this couple of weeks ago, when they announced it, hell yeah! Wardoe#3735

Hard to talk about Definitive version when we hear for example that some tracks (Sonic 3 & Knuckles) will be missed because of right issue.
I want to find Michael Jackson’s creations on the ORIGINal version!
(CHUCKY#0351)

Sonic will never go out of style, I love that he’s back in the ring.
Emuliano#9264

Thanks for the best price available for this game! DANI3100#1440