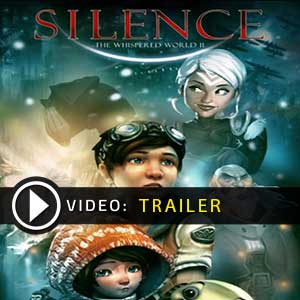 What is Silence The Whispered World 2 CD key?

It's a digital key that allows you to download Silence The Whispered World 2 directly to PC from the official Platforms.

How can I find the best prices for Silence The Whispered World 2 CD keys?

Allkeyshop.com compares the cheapest prices of Silence The Whispered World 2 on the digital downloads market to find the best sales and discount codes on trusted stores.

Silence: The Whispered World 2 is an adventure video game. The game is developed and published by Daedalic Entertainment.

In the middle of a war, a sixteen year old named Noah and his little sister Renie are hiding in a bunker, seemingly safe from the bombardment outside. In a war, you either live or you die, but here, the middle ground is called Silence.

Renie ventures into this Silence and gets lost in it. Noah must then search for her there. Silence is scarred because of the suffering that the war has brought. Due to these scars, dark creatures now haunt the places between the worlds.

It will now be placed upon Noah and Renie’s hands to save Silence in order to save themselves as well.

Silence offers a touching storyline with amazing and appealing characters. The background is a beautiful 2D art and the characters come to life at you in 3D.

Prepare for a heartwarming adventure with Silence: The Whispered World 2.

GOG.COM CD KEY : You need to register on Gog.com, then use the GOG Key to download and activate your game to play Silence The Whispered World 2.
STEAM CD KEY : Use the Steam Key Code on Steam Platform to download and play Silence The Whispered World 2. You must login to your Steam Account or create one for free. Download the (Steam Client HERE). Then once you login, click Add a Game (located in the bottom Left corner) -> Activate a Product on Steam. There type in your CD Key and the game will be activated and added to your Steam account game library.
PC Win 10 / Xbox Key : This is a Microsoft Xbox Play Anywhere code to play on PC and Xbox One and XBOX X|S. You need to have installed Windows 10 Anniversary Edition update on your PC or the latest update on your Xbox console. Log into your Microsoft account to download and play. Read closely the description given by the store to activate your game.
Standard Edition

really nice game with good gameplay and storyline worth checking

This game is really cool. I would advise to get this game @ gamesrocket.com