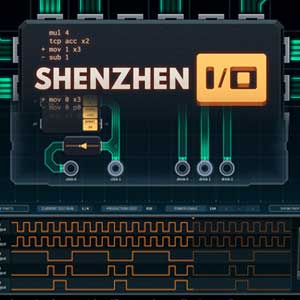 What is Shenzhen I/O CD key?

It's a digital key that allows you to download Shenzhen I/O directly to PC from the official Platforms.

How can I find the best prices for Shenzhen I/O CD keys?

Allkeyshop.com compares the cheapest prices of Shenzhen I/O on the digital downloads market to find the best sales and discount codes on trusted stores.

GOG.COM CD KEY : You need to register on Gog.com, then use the GOG Key to download and activate your game to play Shenzhen I/O.
EU STEAM CD KEY: Requires an EUROPEAN IP address or you must activate it with a VPN (Virtual Private Network) in order to play Shenzhen I/O. Might have languages restrictions or language packs. Read the description on the store game page to know if the EU IP is only needed for activation or for playing also (maybe on EU Servers). Most of the stores offer you their help, or show you how to do this with a tutorial to follow.
EUROPEAN STEAM GIFT : It’s a steam gift for Europe which requires an European IP address to activate and to play Shenzhen I/O on Steam. Read carefully the store description about region and language restrictions.
STEAM GIFT : A Steam gift is a one-time transfer you receive. You activate and install Shenzhen I/O to play on Steam, it is a non-refundable game that stays in your Steam games collection. Please read the store description about any language or region restrictions.
STEAM CD KEY : Use the Steam Key Code on Steam Platform to download and play Shenzhen I/O. You must login to your Steam Account or create one for free. Download the (Steam Client HERE). Then once you login, click Add a Game (located in the bottom Left corner) -> Activate a Product on Steam. There type in your CD Key and the game will be activated and added to your Steam account game library.
Standard Edition

One of the best programming puzzle games I’ve played so far. I got introduced to
Zachtronics when I was playing TIS-100. Since then I’ve tried to play most of their games.

Your task in the game is to solve the puzzles by coding in the micro-controllers that will help you to get the desired outputs. The puzzles are not that easy, but also not that tough(except some of the later puzzles).

The game provides you the 41 page long manual on various micro-controller components and list of basic assembly language syntax that you will be using through out the game. Since you won’t have any tutorials in the game, reading the manual is a must. I printed out the PDF manual, and I would suggest you to do the same, it adds an extra layer to the immersion factor, making you feel like an engineer working for Shenzhen Electronics.

If you are stuck in any puzzles and want to refresh your mind, there is in-game solitaire game, one of the best solitaire game I ever played.