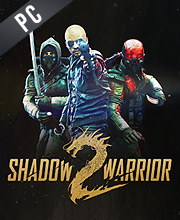 What is Shadow Warrior 2 CD key?

It's a digital key that allows you to download Shadow Warrior 2 directly to PC from the official Platforms.

How can I find the best prices for Shadow Warrior 2 CD keys?

Allkeyshop.com compares the cheapest prices of Shadow Warrior 2 on the digital downloads market to find the best sales and discount codes on trusted stores.

Shadow Warrior 2 from the Shadow Warrior series is an action, adventure video game that is developed by Flying White Hog and published by Devolver Digital.

The story takes part five years after the events between Lo Wang and his deceitful boss and the shadow realm. Regardless of what Lo Wang did, darkness still prevailed making a world where humans learned to live with demons side by side however not in a peaceful way.

Now, Lo Wang, a once feared warrior lives in the shifting widelands, making a living as a hired sword for the Yakuza which doesn’t make much. When one of his seemingly easy missions go wrong, Lo Wang gets catapulted back once again to rid the world of evil.

Play as the sharp-tongued hero Lo Wang using your lethal blades, powerful guns and compelling magic to purge the world of the demons.

You can play alone in single player mode or in a 4 person Co-op with your friends. Take up the challenges of the main mission as well as the side quests. Also get to maintain your ninja style by customizing your armor, items and loot to enhance your performance.

GOG.COM CD KEY : You need to register on Gog.com, then use the GOG Key to download and activate your game to play Shadow Warrior 2.
EU STEAM CD KEY: Requires an EUROPEAN IP address or you must activate it with a VPN (Virtual Private Network) in order to play Shadow Warrior 2. Might have languages restrictions or language packs. Read the description on the store game page to know if the EU IP is only needed for activation or for playing also (maybe on EU Servers). Most of the stores offer you their help, or show you how to do this with a tutorial to follow.
EUROPEAN STEAM GIFT : It’s a steam gift for Europe which requires an European IP address to activate and to play Shadow Warrior 2 on Steam. Read carefully the store description about region and language restrictions.
STEAM GIFT : A Steam gift is a one-time transfer you receive. You activate and install Shadow Warrior 2 to play on Steam, it is a non-refundable game that stays in your Steam games collection. Please read the store description about any language or region restrictions.
STEAM CD KEY : Use the Steam Key Code on Steam Platform to download and play Shadow Warrior 2. You must login to your Steam Account or create one for free. Download the (Steam Client HERE). Then once you login, click Add a Game (located in the bottom Left corner) -> Activate a Product on Steam. There type in your CD Key and the game will be activated and added to your Steam account game library.
Windows 10 Global : This is an Worldwide Microsoft code to play on PC for Worldwide . You need to have installed Windows 10 Anniversary Edition update on your PC. Log into your Microsoft account to download and play. Read closely the description given by the store to activate your game.
Collection
Deluxe Edition
Standard Edition

This game is absolutely spectacular.
The great essence of the original remake of 2013 is there and a whole lot better.
Greater visuals, great gameplay, improved enemies, improved weapons, improved everything. I’m really excited to have play this game.
The best store to buy it is Kinguin 🙂

Again, Kinguin seem to have the best price, so I would pick them.

I would buy Shadow Warrior 2 from Kinguin as they have a great price for it as well as being a reliable vendor in my experience.

Those are some great deal right there!Thanks for those.