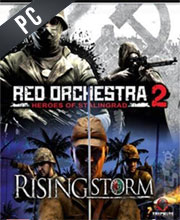 It's a digital key that allows you to download Red Orchestra 2 Rising Storm directly to PC from the official Platforms.

How can I find the best prices for Red Orchestra 2 Rising Storm CD keys?

Allkeyshop.com compares the cheapest prices of Red Orchestra 2 Rising Storm on the digital downloads market to find the best sales and discount codes on trusted stores.

Red Orchestra 2 Rising Storm is a World War II-themed tactical first-person shooter video game developed by Tripwire. It is a stand-alone expansion pack to Red Orchestra 2: Heroes of Stalingrad where the story revolves around the Pacific campaign of World War II.

With a new arsenal of weapons, that relate to the American and Japanese weaponry used in the Pacific Theater to maintain historical accuracy, the game allows the player to be able to take part of either side – American or Japanese – fighting across iconic locations from the famous island-hopping campaigns in the Pacific from 1942 to 1945, giving out a rich gaming experience. Red Orchestra 2 Rising Storm offers a new type of gameplay to the franchise – “asymmetrical warfare” – with more improved fully automatic weapons to double the action.

A whole squad working together can really make a difference. It’s nice to play a game where teamwork is the most important factor to obtain victory. The game’s realistic gritty atmosphere, graphics, Japanese banzai attacks, and American weaponry along with balanced maps will totally get you. Rising Storm, just like its fore bearer, is indeed a phenomena and worthy tactical shooter in its own way.

EU STEAM CD KEY: Requires an EUROPEAN IP address or you must activate it with a VPN (Virtual Private Network) in order to play Red Orchestra 2 Rising Storm. Might have languages restrictions or language packs. Read the description on the store game page to know if the EU IP is only needed for activation or for playing also (maybe on EU Servers). Most of the stores offer you their help, or show you how to do this with a tutorial to follow.
EUROPEAN STEAM GIFT : It’s a steam gift for Europe which requires an European IP address to activate and to play Red Orchestra 2 Rising Storm on Steam. Read carefully the store description about region and language restrictions.
STEAM GIFT : A Steam gift is a one-time transfer you receive. You activate and install Red Orchestra 2 Rising Storm to play on Steam, it is a non-refundable game that stays in your Steam games collection. Please read the store description about any language or region restrictions.
STEAM CD KEY : Use the Steam Key Code on Steam Platform to download and play Red Orchestra 2 Rising Storm. You must login to your Steam Account or create one for free. Download the (Steam Client HERE). Then once you login, click Add a Game (located in the bottom Left corner) -> Activate a Product on Steam. There type in your CD Key and the game will be activated and added to your Steam account game library.
Bundle
Deluxe Edition
Game Of The Year Edition
Standard Edition

This game is INTENSE. It’s tactical and strategy wrapped up in a FPS. Ramboing just gets you sawn in half by MGs. Love the realistic feel.

Super game, it’s so real. Shooting, moving and more stuff like this. Graphics are nice too.. gave me a true WWII experience.