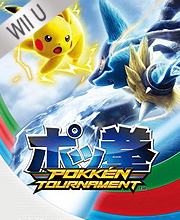 What is Pokken Tournament Game Code?

It's a digital key that allows you to download Pokken Tournament directly to Nintendo Wii U from Nintendo eShop.

How can I find the best prices for Pokken Tournament on Wii U ?

Allkeyshop.com compares the cheapest prices of Pokken Tournament on the digital downloads market to find the best sales and discount codes on trusted stores.

Pokkén Tournament is a fighting game developed by Bandai Namco Studios and published by The Pokémon Company.

Have you caught them all? Pokken Tournament is a chance for you to battle your pokemon against your friends or other players online. You will be given a 3 dimensional approach to battles which allows you a 360 degree view of the battle going on. The different pokemon are all given different abilities as well as simple attacks and more complicated combination attacks, some attacks may be more effective depending on the type of pokemon you are using and the pokemon that you are battling.

A nice addition is that you will occassionaly be allowed some assistance from a second pokemon in a battle. You must be careful how you use your pokemon and the special attacks you use because you must charge your pokemon up for these attacks and will want to use them to their best advantage.

Zoom 1m 3m 1y All
Track product
NINTENDO GAME CODE EUROPE : This is Pokken Tournament Download Code for Nintendo Europe Console. Use the Digital Game Code on the Nintendo eShop of your Console. Once connected to the Nintendo eShop, you can enter and redeem the Download Code. Read carefully the store description about any language and region restrictions.
Standard Edition
Compare Choose & Buy Download (803)