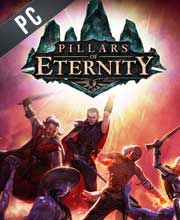 Pillars of eternity is an Isometric RPG developed by Obsidian Entertainment Inspired by classic CRPGs like Baldur’s Gate and Planescape Torment. Pillars of eternity take place in the world of Eora where magic exists and is shaped by the quality of the person’s soul. Dyrwood a coastal region in the southern hemisphere of Eora, a highly contested region by different factions of the world for its many Engwithan ruins. Engwithans are an ancient extinct society rumored to have a lot of insight into the nature of souls. In the middle of all this is the player character a newcomer of Dyrwood caught up in a strange supernatural phenomenon and forced to deal with the various factions that are vying for control of the region.

If you have been desperately hoping for this type of game for years, then you are going to be delighted to find that Pillars of Eternity meets and perhaps surpasses your expectations.  If you aren’t, or you are simply too young to have played RPGs from the ‘90s, then you owe it to yourself to give this experience a try and see if it is for you.

As a spiritual successor to some of my favorite RPGs of all time, Pillars of Eternity does those games justice with its ultra-traditional story, presentation, and mechanics. But I recommend other people check it out as well, as it offers a sprawling world to explore, and a fantastic cast of companions to interact with, making it the perfect example of a retro genre done right.

This edition of pillars of eternity contains the base game and two in-game items the giant miniature space piglet pet and the Gauns pledge ring.

This Bundle contains the Pillars of eternity and Tyranny base game.

This Edition includes the base game and some bonus digital goodies.

The most comprehensive bundle of all Pillars of Eternity DLCs this Edition Contains:

This edition contains the base game, the pillars of eternity digital manual, White march parts 1 and 2.

This Edition Includes the base game, champion edition content, and even more digital goodies.

Explore the mountainous region of the white march a once prosperous dwarven territory now only ruins remain of the dwarves home. Stalwart a remote mining village in the white march has contacted the watcher of cad Nua for help in restarting the Dormant Draven forges in Durgan’s Battery in hopes of re-establish the village’s mining industry.

Following the restoration of the forges of Durgan’s battery the village of stalwart has become prosperous, but now a new threat looms on the horizon for the village and the rest of the white march.

EPIC GAMES KEY : Region Free / Worldwide. Requires Epic Games Launcher App in order to play the game. You need to create a free account here in order to download Pillars of Eternity from Epic Plateform . Read the description on the store page about any language or country restrictions.
GOG.COM CD KEY : You need to register on Gog.com, then use the GOG Key to download and activate your game to play Pillars of Eternity.
PUBLISHER WEBSITE CD KEY: Use the CD Key Code to download directly on the Official Website or from the store to play Pillars of Eternity. Follow the instructions given by the store. Verify languages available and possible region restrictions before buying.
EU STEAM CD KEY: Requires an EUROPEAN IP address or you must activate it with a VPN (Virtual Private Network) in order to play Pillars of Eternity. Might have languages restrictions or language packs. Read the description on the store game page to know if the EU IP is only needed for activation or for playing also (maybe on EU Servers). Most of the stores offer you their help, or show you how to do this with a tutorial to follow.
STEAM CD KEY : Use the Steam Key Code on Steam Platform to download and play Pillars of Eternity. You must login to your Steam Account or create one for free. Download the (Steam Client HERE). Then once you login, click Add a Game (located in the bottom Left corner) -> Activate a Product on Steam. There type in your CD Key and the game will be activated and added to your Steam account game library.
STEAM KEY ROW : It means for Rest Of the World countries which are not concerned by the region restrictions. This product can't be purchased and activated in Several countries. Please read the store description to know the full list of countries which are concerned. Use the key to Download and play Pillars of Eternity on Steam.
Ubisoft Connect CD KEY : Ubisoft Connect Digital Code to download and play Pillars of Eternity. You need to install the (Ubisoft Connect Software HERE), then simply add the CD Key on Ubisoft Connect to download the game.
Windows 10 Global : This is an Worldwide Microsoft code to play on PC for Worldwide . You need to have installed Windows 10 Anniversary Edition update on your PC. Log into your Microsoft account to download and play. Read closely the description given by the store to activate your game.
Bonus Edition
Bundle
Champion Edition
Collection
DLC
Definitive Edition
Hero edition
Royal Edition
Standard Edition
Compare Choose & Buy Download (689)