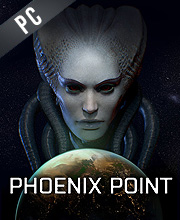 What is Phoenix Point CD key?

It's a digital key that allows you to download Phoenix Point directly to PC from the official Platforms.

How can I find the best prices for Phoenix Point CD keys?

Allkeyshop.com compares the cheapest prices of Phoenix Point on the digital downloads market to find the best sales and discount codes on trusted stores.

Phoenix Point is a strategy, turn-based video game which is developed and published by Snapshot Games.

It is 2022 and the Earth’s permasoft begins to melt exposing an extraterrestrial virus. This virus is named by scientists as the Pandoravirus and it causes nightmare inducing mutations to both humans and animals. The spread of this virus is the cause of the global apocalypse.

Present time 2047, only a few have survived and factions have been made, everyone is competing for the scarce resources left by the devastation.

You will be playing as the leader of the Phoenix Project. This is a secret organization which is found globally and the main purpose is to help humanity is these times of despair. You will gather the best remaining soldiers, engineers, and scientists. You will have to make the best strategic and tactical choices in order to save the rest of humanity.

The other factions that you will be going against are the Disciples of Anu, New Jericho, and the Synedrion. And, of course, all the alien mutations.

The Bundle Edition includes Phoenix Point plus the Blood and Titanium DLC.

The Year One Edition comes with 3 DLC Packs: Blood & Titanium DLC, Legacy of the Ancients and the Living Weapons Pack and a bunch of updates. The enemies are also ever-changing. An FPS-style free-aiming system is also available where you can target the weak spots of enemies.

The Ultra Edition includes everything in the Deluxe Edition plus the Season Pass.

Phoenix Point is a decent “Xcom” game. The only problem with the game is that it’s very unbalanced. I only recommend for fans of the genre.

Looks interesting, i will take a deep look to this game, because its not very expensive.

Looks very very interesting. An unique approach to a strategy game, somehow reminds me of the original Metal gear solid

Game is looking good, i hope allkeyshop will bring us best price for sure.

Phoenix Point is a strategic game. I like some games of that type but with stealth and hacking. Good day and good gaming. 🙂