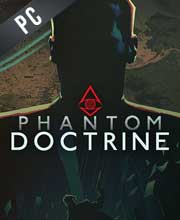 What is Phantom Doctrine CD key?

It's a digital key that allows you to download Phantom Doctrine directly to PC from the official Platforms.

How can I find the best prices for Phantom Doctrine CD keys?

Allkeyshop.com compares the cheapest prices of Phantom Doctrine on the digital downloads market to find the best sales and discount codes on trusted stores.

Phantom Doctrine is an action, strategy, role-playing video game that is developed by CreativeForge Games and published by Good Shepherd Entertainment.

Set in the Cold War, you will play as the leader of a secret organization known as the Cabal and you will be preventing a global conspiracy from happening. You have to uncover the sinister plot by carrying out missions, going through classified files and questioning enemy agents.

Offering a strategic turn-based espionage thriller. Players get to play in the gripping single-player campaign mode that has around 40+ hours of gameplay. You have to go through the game alone, however, if you find yourself in a pinch, you can always call on reinforcements. Stealth operations will be your advantage, use muffled weapons or do silent takedowns and find out what the enemy agents are up to and stay ahead of the game.

A counterintelligence operation can also be done by recruiting from both the KGB as well as the CIA. Get to solve investigations with a classic pinboard and string approach.

Multiplayer battles are also available via online multiplayer matches. Get to create a fully customizable character and use technology to your advantage.

All of these and more can be expected in Phantom Doctrine. Will you be playing as the KGB or the CIA? Any will do as long as you find out the truth about the global conspiracy.

GOG.COM CD KEY : You need to register on Gog.com, then use the GOG Key to download and activate your game to play Phantom Doctrine.
EU STEAM CD KEY: Requires an EUROPEAN IP address or you must activate it with a VPN (Virtual Private Network) in order to play Phantom Doctrine. Might have languages restrictions or language packs. Read the description on the store game page to know if the EU IP is only needed for activation or for playing also (maybe on EU Servers). Most of the stores offer you their help, or show you how to do this with a tutorial to follow.
EUROPEAN STEAM GIFT : It’s a steam gift for Europe which requires an European IP address to activate and to play Phantom Doctrine on Steam. Read carefully the store description about region and language restrictions.
STEAM GIFT : A Steam gift is a one-time transfer you receive. You activate and install Phantom Doctrine to play on Steam, it is a non-refundable game that stays in your Steam games collection. Please read the store description about any language or region restrictions.
STEAM CD KEY : Use the Steam Key Code on Steam Platform to download and play Phantom Doctrine. You must login to your Steam Account or create one for free. Download the (Steam Client HERE). Then once you login, click Add a Game (located in the bottom Left corner) -> Activate a Product on Steam. There type in your CD Key and the game will be activated and added to your Steam account game library.
STEAM KEY ROW : It means for Rest Of the World countries which are not concerned by the region restrictions. This product can't be purchased and activated in Several countries. Please read the store description to know the full list of countries which are concerned. Use the key to Download and play Phantom Doctrine on Steam.
Collector Edition
Deluxe Edition
Standard Edition

Dreamgame has the cheapest price for Phantom Doctrine CD Key

Nice Tactic game with Commandos Style gameplay , get it cheap on Dreamgame.com

This is a good game, it reminds me of XCOM series, it relates to many genres: Turn based, Strategy, tactical and also stealth, cheap prices for a recently released AAA game!

seems interesting strategy game. xcom like maybe?
i hope so.
Have fun

I like the look of its new tactical/strategy game! Hopefully some bugs may be ironed out and more stores will carry it