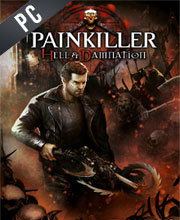 It's a digital key that allows you to download Painkiller Hell & Damnation directly to PC from the official Platforms.

How can I find the best prices for Painkiller Hell & Damnation CD keys?

Allkeyshop.com compares the cheapest prices of Painkiller Hell & Damnation on the digital downloads market to find the best sales and discount codes on trusted stores.

Painkiller: Hell & Damnation is a first-person shooter action videogame, both a remake of and a sequel to Painkiller, developed by The Farm 51 and published by Nordic Games.

The player has to get through each level, from start to finish, by slaughtering multitudinous demons. The game is divided into several chapters, each with several levels. Each level presents a new location with various themes and includes castles, monasteries, graveyards, and more.

Several classic weapons return, including the Painkiller, the stakethrower, the shotgun, and the electrodriver. New guns will also be available such as the Soulcatcher, which shoots saw blades in primary firing mode and sucks the souls out of the enemies with its secondary firing.

Painkiller: Hell & Damnation also adds several multiplayer modes to the series. The entire single-player campaign can be played by two people and the level of difficulty adjusts in accordance with the 2 players, either through the number of enemies or the amount of hit point In survival mode, up to eight players battle for survival in a limited area of one map.

Endless waves of enemy hordes will attack the player or players. Other player vs player based game modes include deathmatch, team deathmatch, capture the flag and duels.