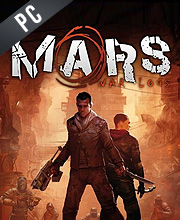 It's a digital key that allows you to download Mars War Logs directly to PC from the official Platforms.

How can I find the best prices for Mars War Logs CD keys?

Allkeyshop.com compares the cheapest prices of Mars War Logs on the digital downloads market to find the best sales and discount codes on trusted stores.

The game takes players to the planet Mars nearly a century after a cataclysm created chaos for the planet and its colonists. Guilds have now been battling over water, a very valuable resource. These two guilds are named Aurora and Abundance. You will take on the role of Roy Temperance, a prisoner of war who escaped and found himself caught between factions as well as creatures created by the planet’s radioactive environment.

Roy is a talented adventurer, and you will be taking on a variety of dynamic quests as well as tactical combat. The game includes a high level of character specialization with different skill trees available along with an excellent crafting system. Side quests can also be taken on from non-playable characters (NPCs) you will meet along the way. You also won’t have to take on challenges alone, as there will also be various characters who will join you in your adventure and will help you out away from and during combat. The game also features a crafting and looting system which will be of great help in modifying existing items, or even crafting new ones.

If a one-of-a-kind adventure is what you’re looking for, Mars War Logs will definitely be the best choice for you.