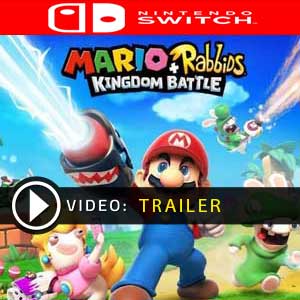 It's a digital key that allows you to download Mario + Rabbids Kingdom Battle directly to Nintendo Switch directly from Nintendo eShop.

How can I find the best prices for Mario + Rabbids Kingdom Battle on Nintendo Switch ?

Allkeyshop.com compares the cheapest prices of Mario + Rabbids Kingdom Battle on the digital downloads market to find the best sales and discount codes on trusted stores.

Mario + Rabbids Kingdom Battle is an adventure, strategy video game that is published by Ubisoft and developed by Ubisoft Paris.

Get the best of both worlds, developed exclusively for the Nintendo Switch, Mario + Rabbids Kingdom Battle is the best game of the franchises. It combines everything that you love about the Mario universe and the crazy antics of the Rabbids.

A mysterious vortex has opened and the Mushroom Kingdom had been torn apart as the chaotic Rabbids gets transported to this peaceful land. To fix this, Mario, Luigi, Yoshi and Princess Peach must team up with four Rabbids heroes. Battle it up with weapons through the four worlds that are filled with combat enemies and puzzles.

Play solo or with a friend, the game is quite easy but is very difficult to master that offers a fresh gameplay experience.

Choose from an arsenal of weapons through all four worlds and restore peace to the Mushroom Kingdom.

And since the game is in the Nintendo Switch, you can play anywhere on the go.

Regarding this issue, we will be forwarding this to the proper department for them to be able to check and verify the problem

i was trying to use the codes for the nintendo switch games on psngames.org for about a month but they are not working!

for actually every game the reseller “PSNGAMES.ORG” offers Nintendo CODES on your site, but this information isn’t right. They exclusively offer Nintendo accounts, which contain the wished game. Could you please correct these entries?

Hi Chris, we sincerely apologize for this error. We will fix this right away. Thank you for your comment.